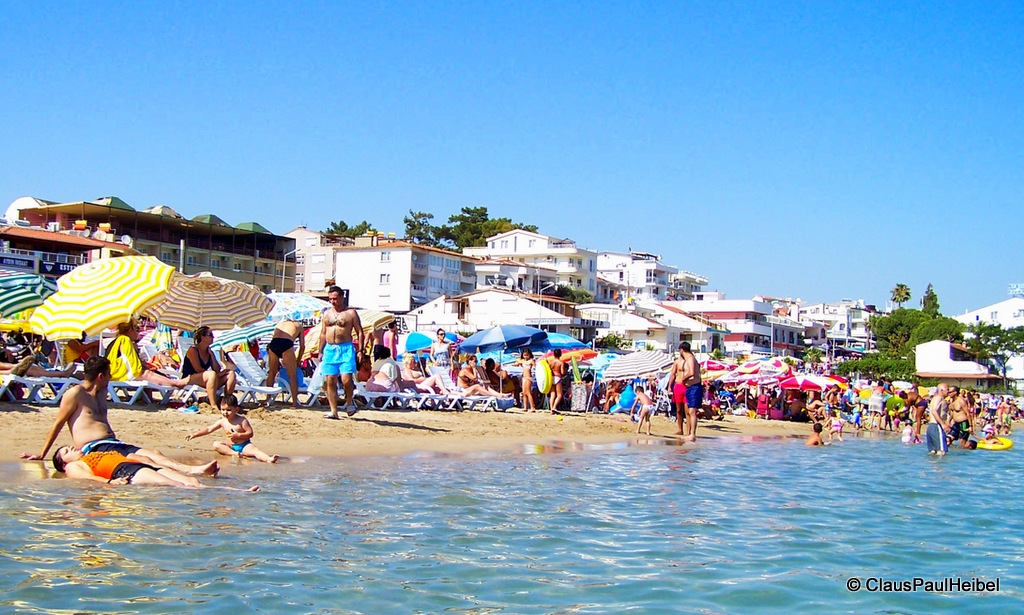 ALTINKUM ALTIN=Gold + KUM=Sand GoldenSands…
Didim Marina is ready for the yachts was really what we thought as we first saw them. Then we got a bit closer and realised those were two new floating type jetty made out of wood to provide extra space for sun lovers inside the sea.

Now there is no place left that beach lovers can go into the sea because of the bad, stony surface. The wild and rocky part of the main beach of altinkum beautifully covered with the sands in the beginning of the season. Between Altinkum main beach to Tuntas beach (Banana beach in between behind the sea shore of Medusa disco where most of all restaurants has a side by the sea there) are now looking better and suitable for sunbathe. Restaurants and Pubs on the shore serving drinks – food as you wish to order or after a few steps nice terraces built for those who prefers tables and chairs by the large balconies of those restaurants. It was impossible to walk between two ends of those two beaches as you will remember it before.
There are various beaches surrounding Altinkum.

Sagtur Beach is one of them to explore for example. All of the beaches are rather clean, sandy but some of them not as quiet as others. You should use local transport (labelled as “Sehirici” in front panel of the little minibusses) makes a long round between Tavsanburnu (translated “rabbits nose” in English and pronounced like “thavshanbournu” in Turkish) to Yesilkent (translated “green town” in English and pronounced like “yeahshillkent”). During the summer the public transportation “sehirici” minibusses also have routes to mavisehir and Sagtur where also nice sandy beaches are by the huge gum tree to take a rest at the cafe in the shade of that huge gum tree just located in the center of a peninsula divides two holiday sites (or connects them) together…

If you go a little bit further than Tavsanburnu is where Tasburun known as harbour for the local fishermen around Didim Region also nice beaches and sea food restaurants, strawberry fields are… Local Transport Sehirici” is doing rounds to there any more because we are talking about the same place where new AquaPark is located. Just accross the road opposite to Aqua Park of Didim Area is Called Tasburun. Akbuk is nice tidy and clean too… Akbuk minibusses takes you there regularly in every 15 minutes by their minibusses. On the way to Akbuk just before the big five star hotels (Holiday resort – Caprice, etc) the Place called Sahte Cennet is another one to explore.

Cennet means Paradise, heaven and Sahte meand fake, imitation. Turkish holiday makers called it “Sahte Cennet” because of its beauty. It’s like paradise but an imitation one.
Driving on to the Akbuk direction just after the five star luxurious complex Caprice hotel you will be seeing a very small island named Komur AdasI (island of coal) and a little bit further is an another one called Sapli Ada means island with an handle. Yes it is not an island but a peninsula where you can walk to its ruins. While watching Sapli ada from a hill, it is noticable that it looks like a coffee pot with its handle. Between these two islands are also places for snorkelling, fishing, diving…
I will write more of this beautiful landscape and will try to give you tips including some useful Turkish in my further editorials.
Altinkum Custom
Altinkum Harbour: little jetty for local fishermen for winters and place for daily boat tour boats in summers. Also the place where custom office is.

On your visit of Didim Region whether you will accommodate in a hotel or in your summer house some tips will be always useful.

Daily Boat trip Along Altinkum coves and beaches
Boat trip also known as lazy day cruise is a must for the ones loving the beach life. Akbuk Gulf is huge and the sea is very calm. Boat trips are leaving Altinkum jetty by 10:00 am and returning back by 17:00 p.m between the time return and back a superb day out awaits for you to cherish all those beaches, natural coves where the boat stops for a break for approximately about 40 minutes each of them. First stop is at the Paradise island. It was called with the different names before tourists started to come to Altinkum. In the maps it is called PANAYIR Ada (pronounced nearly same as “Pan Higher “) means Island of Fair (like lunapark we have in Altinkum with its Gondola, crashing cars, etc). It is also called Ziraat ada by locals. “Ziraat” means “agriculture” in Turkish. Its because that island has been used as a base to produce hybrid olive trees in late 1960’s. There’s a building on the north east of the Paradise Island where agriculture engineers and students have stayed for their miraculous olive saplings. The project of Ministry of Agriculture had been finished and those buildings have left there as they are today.
“The building with two storeys were for the engineers and building with the doom was for the staff working for them” says one of the locals worked there years ago… The Paradise Island has also known as Esek Adasi (means “Donkey’s Island” in Turkish. There are no donkeys on the island left from those agriculture project any more but plenty of rabbits can be seen) .
During the boat trip they don’t expect the boat will exactly stop at the jetty of Paradise island but stop at the off shore for a swimming break.
What else on the island are the rabbits, a lantern, olive trees. Altinkum side of the island where some of the diving schools are using for their instructions on how to dive and suitable for reef diving with its rocks and stones.
After first stop at the Paradise island you carry on to Yesilkent or Dalyanaki (it sounds like Greek Language but remember we have many common words with the Greeks) Dalyan in Turkish means Fish Trap and Dalyanaki is small of that. Its Dalyanaki is also known as Koy Hizmetleri name. Neither a fish trap nor a Dalyan… This the most preferable place that local fisherman or travellers travelling by their private boats shelter themselves against those big storms in the winters or late summer…

You will have time at the beach or in a restaurant at the same place there while grill is being prepared deliciously includes, meat balls, rice, salad… usual menu for a daily boat trip. Some boats are also serving cips, pasta, or chicken meat instead.
After the lunch you will take off for 3 more natural coves on your way back to Altinkum harbour.
Mind that, this trip sold as “5 islands cruise”, this can be an another tourist influence(!). There is only one island and 4 coves you will see in the end. Some of the bays and the beaches where there are no roads from the shore, very clean and very untouched.

There are boats with a fridge selling ice-cream coming to the boats, if you like to make your day little bit of adventurous, try banana, ringo behind the speed boats belong to the big boat owners usually. That is extra, not included in the bot tour fee. And There are plenty of music and animacion during the daily boat excursions.
a must for all lazy day cruisers:
beware the sun ! 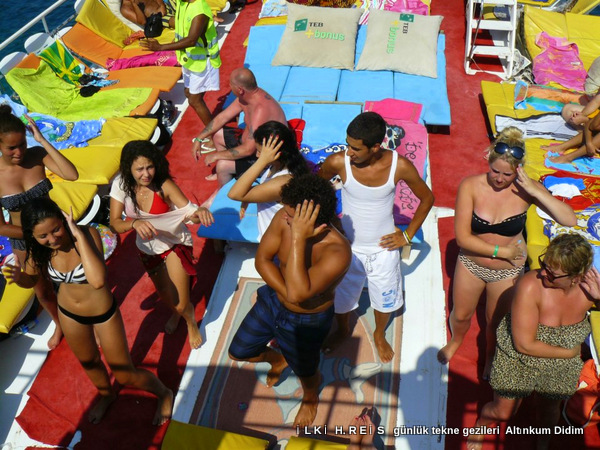 Your lazy day Boat is on the move and you don’t normally realize how much sun you are getting. Because of the reflection out there open sea, you burn twice much quicker. Take sun tan lotions, extra towel cover your head, drink plenty of water (not alcohol) pay extra attention for children, their skin is more sensitive.

When Approaching those natural bays The captain of the Lazy day cruise boat will shout how long are you there for and how deep is it. There are also coves that non-swimmers can go into the water during the visits of lazy day cruise. If the captain forgets to shout just ask him how deep is it before you jump in to the sea.

All the boats got sun beds, lots of cushions, closed circuit Wc system, some of them got showers too, life jackets for non swimmers to go into water safely,

You can book this excursion through travel agents, tour operators or by yourself at the harbour of Altinkum a day before.

Most of the tour operators, travel agents have transport service between – to your accommodation including in the price. Organized boat trip excursions along the bays can also booked for Altinkum. There are also boats organizing boat trip excursions from Akbuk Resort too, with a little bit difference on their visits of the bays but more or less similar service given.